Artificial intelligence, deep learning and machine learning are often confused with each other. These terms are used interchangeably but do they do not refer to the same thing. These terms are closely related to each other which makes it difficult for beginners to spot differences among them. The reason I think of this puzzle is that AI is classified in many ways. It is divided into subfields with respect to the tasks AI is used for such as computer vision, natural language processing, forecasting and prediction, with respect to the type of approach used for learning and the type of data used.
Subfields of Artificial Intelligence have much in common which makes it difficult for beginners to clearly differentiate among these areas. Different approaches of AI can process similar data to perform similar tasks. For example Deep learning and SVM both could be used for object detection task. Both have pros and cons. In some cases Machine Learning is the best choice while sometimes Neural Networks outperforms Machine Learning algorithms.
Here, we will make an attempt to define each of these terms and highlight similarities and dissimilarities with the help of examples.

Artificial Intelligence for short AI is a broad term used for any concept or technique which brings some sort of intelligence to a computer. Computer here means anything which has the capability to store and process data. In many writings, the word machine is used. However, they refer to the same thing.
Artificial intelligence spans a wide range of machine intelligence. It refers to the intelligence that machine uses to play a game against a human, to translate one human language to another, to recognize things in a scene, to classify emails as Spam or not Spam, to drive car, auto pilot of a plain and you name it.

Machine learning is a sub field of Artificial Intelligence. It includes the study of algorithms that brings intelligence to computer systems without any explicitly specified rules. Unlike obsolete expert systems which works on predefined if then rules, machine learning finds patterns in the data and makes decisions by itself. Finding patterns in data by a Machine Learning algorithm is called learning. Huge amount of data is required to teach a machine to perform a specific task. Here blends big data with machine learning. If there is no big data, there is no machine learning.
One of the most important point to remember about machine learning is that researchers or developers are required to specify learnable features in data which is a tedious task. ML algorithm does not perform well on raw data. Extracting learnable features from raw data is called feature extraction which is a crucial task to be done.
Machine learning algorithms include SVM, Random Forest, Decision Tree, Bayesian Network etc.

Deep Learning is considered as a sub field of Machine Learning by many but I think it is a sub field of Artificial Intelligence. It is like a sibling to ML rather than a child. Although, in deep learning a machine learns from data and take decisions based on its knowledge as it does in Machine Learning but its learning process is completely different from Machine Learning approaches.
Deep Learning takes input data in its raw format and decides itself which features are important enough to learn. Deep Learning models perform the feature selection process by itself thats why it is also called feature learning.
Similar to machine learning, deep learning is nothing without huge amount of data. However, we do not need to worry about learnable features and patterns in the data. It finds important features and learn by itself.
Deep Learning uses Neural Network which are inspired by biological neurons. Although, neural networks does not perform as well as biological neurons do but they mimic their functionality up to some extent.

You can think of Artificial Intelligence as it is the earth and Machine Learning and Deep Learning are two subcontinents which are not separated by a clear line. The border is blurry. Of course their are other subcontinents too which are also part of the earth. I think it does not matter if you can differentiate different fields of AI or not. What matters most is that whether you can solve a problem by using Artificial Intelligence or not. AI looks like a mess at the beginning but it is not what most people think it is. 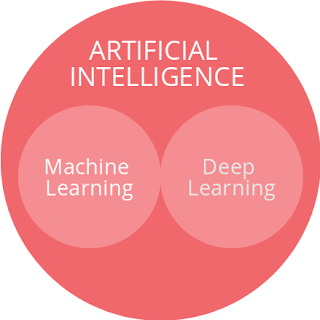 Big Data Analytics There are certain problems that can only solve through big data. Here we discuss the field big data as "Big Data Analytics". The big data came into the picture we never thought how commodity hardware is used to store and manage the data which is reliable and feasible as compared to the costly sources. Now let us discuss a few examples of how big data analytics is useful nowadays. When you go to websites like Amazon, Youtube, Netflix, and any other websites actually they will provide some field in which recommend some product, videos, movies, and some songs for you. What do you think about how they do it? Basically what kind of data they generated on these kind websites. They make sure to analyze properly. The data generated is not small it is actually big data. Now they analysis these big data they make sure whatever you like and whatever you are the preferences accordingly they generate recommendations for you. If you go to Youtube you have noticed
Read more