Samsung Galaxy Fold: A Smart Phone or A TV Remote? 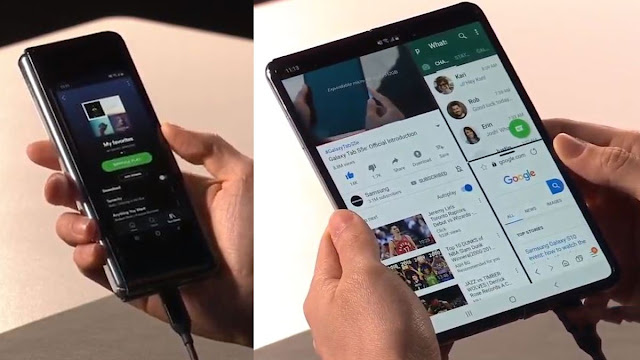 This week The South Korea electronics company has revealed Samsung Fold to media. Bloggers and YouTubers have got their hands on the device but it is not yet released for customers. The phone comes with novel technology, a foldable screen. Although it is a huge move to make smartphones smarter but customers feedback has yet to be seen. Prior to the release of the phone, it is hard to say whether Samsung Galaxy Fold is something that users wanted or something that users needed.
MAYA (Most Advanced, Yet Acceptable), a theory by Raymond Loewy who has designed almost everything says that the most advanced design should be given to users, but not more advanced than what they are able to accept and embrace. An innovation is more likely to be welcomed by its user if it lies at the intersection of novelty and familiarity. If the product is full of astounding innovation but people are not familiar with it and vice versa, the chances of failures are high. As people have seen foldable phones and they are familiar with this technology and a foldable screen is actually something new, Samsung Fold I think lies right in the center of the novelty/familiarity scale. The chances of success are pretty high unless it does not have any surprises waiting for us like other Samsung hand grenades.

Despite the foldable screen, the device comes with other remarkable features. With 6 high definition cameras, 512GB internal memory and 12GB RAM, it has phenomenal multitasking support. Users can run and interact with up to 4 apps at a time. Left screen, top right, bottom right, and a pop-up screen. I love this feature. If Samsung Fold failed to earn its users trust, as we have seen many sliding and folding phones failing in the past, this feature would be pretty productive if introduced in tablets. A quick overview of other specs has been give below.

When unfolded, Galaxy Fold has 7.3 inches screen which looks elegant and is near to perfect for reading books, watching videos, playing games and other activities. It feels more like an elegant tablet than a phone. However, there is a groove right in the middle of the screen which could be pretty annoying for phone addicts. Although Samsung claim that the screen is created from flexible material and glued with advance technology but the chances of failure are high. It is just an intuition. A personal thgouht.
Samsung Fold has another 4.6 inches HD+ display on one of its outer panel which can be used for everything the unfolded screen can be used for. However,
the folded version loses all of its grace and aesthetics and it looks more like a TV remote. It is too large and too heavy to fit in a pocket. I imagine the user would look like an idiot using TV remote in front of no TV.

The battery is one of the thing or metric or something else which is usually used to measure the quality of a device. Samsung Galaxy Fold comes with a 4380 mAh battery which is shared by two screens. For normal phone, 4000 mAh battery lasts for more than 36 hrs by standard usage but for this device, two screens have to be maintained, battery won't last that long. It will consume pretty much amount of charge even on stand by.

Another stunning feature of the mighty Fold is its 6 camera setup. It has 3 rear cameras, a 16MP ultra-wide camera, a 12MP wide-angle camera, and a 12MP telephoto camera. Telephoto lense provide a narrow field of view to focus better at things at a certain distance. 10MP camera and 8MP depth lense on device front can help you grow your fans on Insta. A 10MP selfie camera is also available if you use the TV remote version of the device.
The Samsung Galaxy Fold will be released on April 26 fn the US at an initial price of $1980. Expected release for Europe is in May.
Gadgets News

Big Data Analytics There are certain problems that can only solve through big data. Here we discuss the field big data as "Big Data Analytics". The big data came into the picture we never thought how commodity hardware is used to store and manage the data which is reliable and feasible as compared to the costly sources. Now let us discuss a few examples of how big data analytics is useful nowadays. When you go to websites like Amazon, Youtube, Netflix, and any other websites actually they will provide some field in which recommend some product, videos, movies, and some songs for you. What do you think about how they do it? Basically what kind of data they generated on these kind websites. They make sure to analyze properly. The data generated is not small it is actually big data. Now they analysis these big data they make sure whatever you like and whatever you are the preferences accordingly they generate recommendations for you. If you go to Youtube you have noticed

AI Vs Machine Learning Vs Deep Learning Artificial intelligence, deep learning and machine learning are often confused with each other. These terms are used interchangeably but do they do not refer to the same thing. These terms are closely related to each other which makes it difficult for beginners to spot differences among them. The reason I think of this puzzle is that AI is classified in many ways. It is divided into subfields with respect to the tasks AI is used for such as computer vision, natural language processing, forecasting and prediction, with respect to the type of approach used for learning and the type of data used. Subfields of Artificial Intelligence have much in common which makes it difficult for beginners to clearly differentiate among these areas. Different approaches of AI can process similar data to perform similar tasks. For example Deep learning and SVM both could be used for object detection task. Both have pros and cons. In some cases Machine Learn

Introduction to Data Science: What is Big Data?

What Is Big Data First, we will discuss how big data is evaluated step by step process. Evolution of Data How the data evolved and how the big data came. Nowadays the data have been evaluated from different sources like the evolution of technology, IoT(Internet of Things), Social media like Facebook, Instagram, Twitter, YouTube, many other sources the data has been created day by day. 1. Evolution of  Technology We will see how technology is evolved as we see from the below image at the earlier stages we have the landline phone but now we have smartphones of Android, IoS, and HongMeng Os (Huawei)  that are making our life smarter as well as our phone smarter. Apart from that, we have heavily built a desktop for processing of Mb's data that we were using a floppy you will remember how much data it can be stored after that hard disk has been introduced which can stored data in Tb. Now due to modern technology, we can be stored data in the cloud as well. Similarly, n